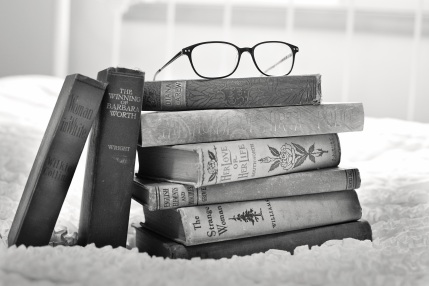 It’s been nearly two years since Into the Night came out, and sometimes in the chaos of student papers, school work, research and writing, I forget that I’ve achieved this thing. This life goal of being an author. When I do remember– like I did today when I saw that November 1st is not just the best day to buy candy, but also National Author’s Day– it feels really good.

I’ve learned so much over the past few years by moving through the process of writing two books and now pushing through revision #1 of my third, that I could spend post upon post talking about it. And maybe I will. But for today, I want to take up some white space with the words of writers who inspire me. Whose words fill me with a sense of longing or pain or joy, and help guide me in creating my own characters.

These are just a few books and a few words, and I hope you’ll share your favorite quotes in the comments.

“The snow fell softly on the street. It muffled sound. It sent people scurrying homeward, so that the street was soon deserted, empty, quiet. And it could have been any street in the city, for the snow laid a delicate film over the sidewalk, over the brick of the tired, old buildings; gently obscuring the grime and the garbage and the ugliness.” –The Street, Ann Petry.

“And these nights were being acted out under a foreign sky, with no one to watch, no penalties attached– it was this last fact which was our undoing, for nothing is more unbearable, once one has it, than freedom.” – Giovanni’s Room, James Baldwin.

“I remember that life in that room seemed to be occurring beneath the sea. Time flowed past indifferently above us; hours and days had no meaning. In the beginning, our life together held a joy and amazement which was newborn every day. Beneath the joy, of course, was anguish and beneath the amazement was fear; but they did not work themselves to the beginning until our high beginning was aloes on our tongues.” –Giovanni’s Room, James Baldwin.

He shoved the boy through the hatch and sent him sprawling. He stood and got hold of the door and swung it over and let it slam down and he turned to grab the boy but the boy had gotten up and was doing his little dance of terror. For the love of God will you come on, he hissed. But the boy was pointing out the window and when he looked he went cold all over. Coming across the field toward the house were four bearded men and two women. He grabbed the boy by the hand. Christ he said. Run. Run. –The Road, Cormac McCarthy.

“Of all of them there at the bar that night, the bartender was the one who survived the longest. He died three weeks later on the road out of the city.” – Station Eleven, Emily St. John Mandel

“But I couldn’t stop imagining our fate up there, the black balloon. A thin globe of air clearly visible behind the toothy palms. I could see that balloon and the moon shining through it but I couldn’t begin to imagine what was going to happen to us.” –Swamplandia, Karen Russell.

Keep reading and writing, everyone.