Today’s post is about passion; passion for what you do, and the passion it takes to make other people feel passionate too. (That was a little too much passion right there). Last night I had the privilege and good luck to see rockstar violinist, Joshua Bell, perform. Chances are if you’ve ever heard a solo violin in film or television, say for instance in The Red Violin , you’ve heard Joshua. He is a technically impressive violinist, i.e., when he plays some strings of notes, all I can think is how is that physically possible? I mean, the man is like butter… smooth. (Cheesy, but accurate simile.) However, he’s also incredibly emotive both in his music and his body, and it’s a joy to watch him.

Okay, the fan girl bit is done. Yes, Joshua Bell has what we artists always dream about—a full time, well-paid gig doing what we love. He tours, he plays, he faces adoration from his fans. He’s talented and lucky. But what about the rest of us? The ones who work 40-60+ hours a week at day jobs and still dream of writing or painting, or singing and dancing? I guess we just have to dig through the before and after work stupor, the piles of emails and phone calls, and the bad selection of T.V., and actually do what we love.

The number of hours I’ve wasted watching shows that I was only half into could have produced dozens of short stories. It could have helped me revise my first draft of novel #2. I could have actually picked up one of my two violins and enjoyed playing.

In 2007, Joshua Bell participated in a sociological experiment for the Washington Post that many of you have since heard about. He took up shop one day as a regular joe—a busker in D.C.’s L’Enfant Plaza metro stop. Despite his drab appearance, he was playing pieces akin to the one I paid $60 and some people paid $120 to see last night. Only seven people stopped to listen, and after playing six incredibly difficulty pieces, he had only made about $32. In Gene Weingarten’s article about Bell’s Metro experiment he says,“The poet Billy Collins once laughingly observed that all babies are born with a knowledge of poetry, because the lub-dub of the mother’s heart is in iambic meter. Then, Collins said, life slowly starts to choke the poetry out of us. It may be true with music, too.”  This a really depressing statement, but with trashy TV, more ads than you can handle, and just the general busywork of social media and work, I find that it can be unfortunately all too true. Lesson? You can’t just stop and work on your own passion. Enjoy others’ as well. Who knows, maybe they’ll inspire you.

As a quick bonus, I wanted to show you my violins. The one on the left was made in 1904, and the one on the right was my great-grandmothers’, although I don’t have a date for it. 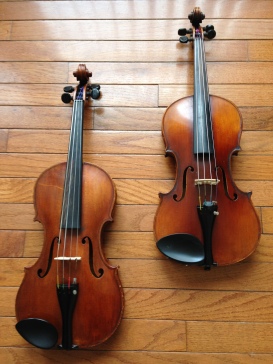